if you have less than 500,000-700,000 clicks in the “clicks” table and the CPV Lab Pro interface and Stats pages are quick and responsive, you most likely won’t see a direct benefit from caching.

# Setting up the CRON Job

# 1. Login into cPanel and find the ‘Cron jobs’ page

# 2. Then enter the command

# A sample setup for the Cron job to run at 15 minutes over the hour, every hour (Recommended): 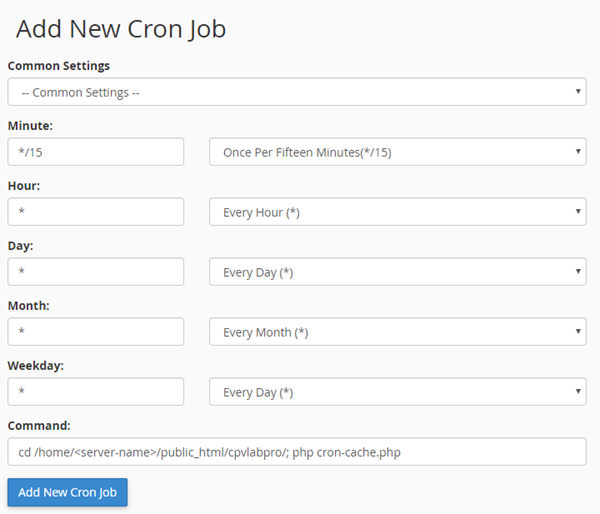 A typical caching configuration section from the Configuration Editor Page looks like this:

# The “Clicks to process at once” option

# The “Delay in Aggregating Clicks” option

# The “Clicks to geo-encode at once” option

# Additional Automatic Clean-Up Features executed by enabling one of the 2 Cron jobs:

If you are tracking high volumes of traffic, and notice any delays when loading stats or reports in the interface, then Yes! For Users that don’t run high traffic, do not need to enable caching as it won’t be required. You also need to have some server knowledge in order to enable and customize caching on your server.

# 2. How often should I setup the Cache Cron job to run?

# 3. Visitors don’t appear in Stats - I’ve tested with the Campaign URL and no visitors appear in the Stats page.

# 5. Records disappeared from the “clicks” table

# 6. I have visitors that convert after a long interval of time (24 hours), should I set the “Delay in Aggregating Clicks” configuration option to not aggregate data from the last 24 hours?

# 7. I want to upload a list of converting subIDs for old visitors that were already aggregated. Will this work?

# 8. I want to remove a false conversion from the database for a visitor that was already aggregated. Is this possible?

You may also find useful: